skip to main | skip to sidebar

In my defence, however, I have been working on a major project this last few months. Namely an exhibition based on my favourite movie of all time - The Quiet Man - which starred John Wayne and Maureen O'Hara.

I have managed to organise a one-man exhibition of my latest paintings and print ranges in none other than the pub made famous in the movie - PAT COHAN'S BAR.

The exhibition will take place over the weekend of Friday, Saturday, Sunday the 26th, 27th and 28th of August 2011 in the village of Cong (Innisfree in the movie), County Mayo, Ireland. This will coincide with a festival celebrating the 60th anniversary of the making of the movie in the village.

A special year indeed to visit and be part of the festivities. It would be wonderful if any of you could make it, but be sure to book your accommodation early as the village Hotels, B&B's and campsites will fill up fast.

Have a look at my new dedicated website for this project www.the-quiet-man.net

Let me know if you are planning to attend or wish to buy a painting or print as a memento of this special year. Contact me through the contact page on the website above or my personal website www.tjmiles.com
Posted by TJ Miles at 11:21 AM 2 comments:

Another exhibition, another Dollar. Now back from Turkey and working flat out on my next exhibition which is to be in......wait for it.........yes, Turkey. Coming hot on the heels of the last one, I was asked to set up another, larger exhibition of my work in downtown Alanya, by an art collector met through contacts from the last trip. So, if you are visiting Alanya in July I will be somewhere near the central Souk.
This exhibition has come right in the middle of my preparations for the grand opening of the first international showing of the long awaited 'Trans Mongolian Railway' exhibition. This first leg will take place at a gallery in Lisboa, Portugal in September. Busy times ahead but I will keep you posted. 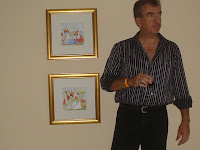 Setting up the exhibition single-handed - with glass in hand of course. 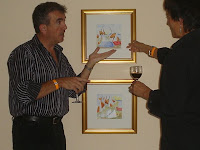 Discussing the finer points of my work with members of the public.

The Norway exhibition is still running and already I am preparing to head off to Turkey for the next. While I am doing that ANOTHER exhibition I am involved in 'IMPRESSIONS OF SPAIN' takes place in Spain. It always seems to come like buses - three at once and then nothing for months.
Yet again the volcano in Iceland is doing it's best to disrupt the proceedings.
I will update things as they progress - ash willing of course....
Posted by TJ Miles at 10:36 PM 2 comments: 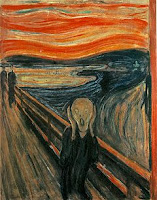 The four flights went without a hitch, the exhibition launch was a success, and I can honestly say that Norway is a landscape of amazing extremes. Flying over the mountainous region after a quick stop in Oslo airport for a breathless, touch and go flight change, revealed the frozen heart of the country. Winter was still very much in evidence as vast lakes remained completely solid, the smooth skin of ice fissured only by the criss-cross of ski tracks. Touching down on the west coast near idyllic Ålesund revealed the impact that the Gulf Stream and ever so slightly warmer north Atlantic has on this part of the world. High, snow capped mountains, gaily painted wooden houses and steep fjord walls rushing into the deep water painted a canvas without equal. The ice level stopped a few hundred metres above sea level and, apart from a few snow flurries, thankfully remained there. Not an ash cloud was in sight.
In such a setting, this vast icy country was melted by the warmth and hospitality of the people met along the way. My sincerest thanks go to our hosts over the few days experienced in Norway, Alfhild and Jan Arne, Ida-Alice and Berit. As well of course, to all those who invested in all our artworks. My thanks also go to the Brodrene Vik Gallery and the culture secretary of Syvde Kommune for their support in bringing the exhibition to fruition, and for becoming the latest TJ Miles’ corporate collectors.
A flight back from Vigra airport - NOT Viagra - as most people tend to misread it (where the joke goes that all flights are guaranteed to get up without a problem but can’t necessarily come down again as quickly), took me to seriously expensive Oslo once again. A visit to the royal palace saw a full colour parade of soldiers, bands and dignitaries line the streets waiting for my triumphal return to the capital. How nice to have such pomp and ceremony laid on just for me.
Ironically, at just the same moment the President of Russia, Dmitry Medvedev, just happened to drive past and give me a wave. I wondered if he had come especially to see me as well. Apparently he was also in town to sign some agreement or other while his wife walked the streets and did a bit of shopping.
Edvard Munch’s painting was still screaming as I left for the airport before midnight to catch the early morning red-eye flight back to Spain. By 5am, while trying to sleep on a back breaking wooden bench until the check-in, I finally understood why the subject of Munch’s most famous painting was in such a bad mood. Oh, the indignity of it all! A final de-icing of the wings before takeoff did little to sooth my tired and furrowed brow. Never let anyone tell you that being an international artist is always a glamorous experience.
Posted by TJ Miles at 10:34 PM No comments:

EXHIBITION IN NORWAY BACK ON!!

Vulcan seems to be showing a gentle side after all and has, for the moment, softened his ire towards northern Europe.
Therefore, given that if we arrive safely, the exhibition is definitely back on the agenda.
Maybe I should paint a picture of the ash cloud as a final piece for the expo.
Watch this space....
Posted by TJ Miles at 5:19 PM 1 comment:

Atlanterhavsveien
My latest art exhibition, due to be held near Alesund in Norway, is almost certainly cancelled until further notice due to the Icelandic volcano erupting and covering the whole of Europe with a gigantic cloud of ash this past week. I had been due to fly from Spain to Norway on Thursday but unfortunately that looks like an ever decreasing possibility. This, of course, also included the transportation of my paintings as well....

Undredal kyrkje
I will update everyone with a new date for the Norway exhibition as soon as things calm down.

The good news is that the long awaited exhibition based on my travels through China, Mongolia and Russia last year is to be shown for the first time in September, in Lisboa (Lisbon), Portugal. As long as the ash cloud has dissapated by then of course.
In the meantime, have a look at some of my images for Norway. 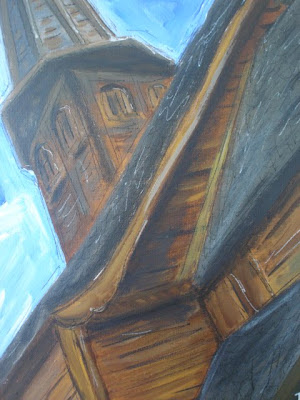 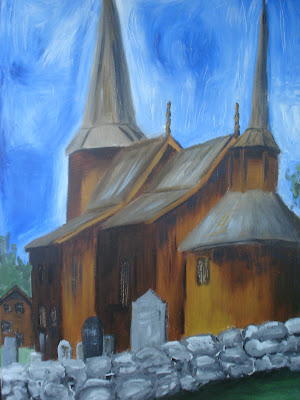 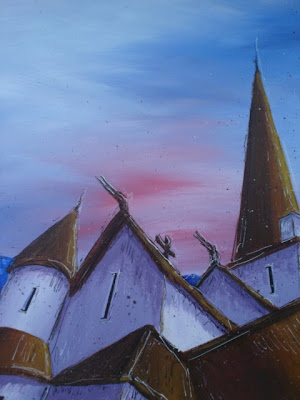 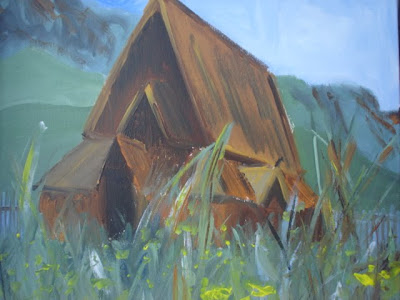 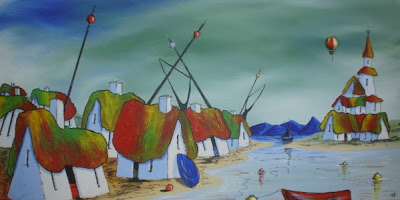 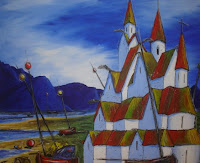 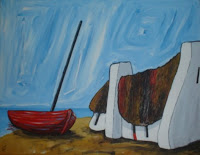 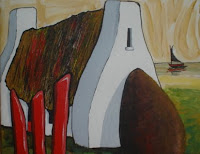 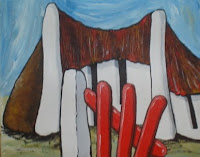 Behind the red gate
Here is a series of small watercolours completed for the same expo.

The Siege Of Leningrad 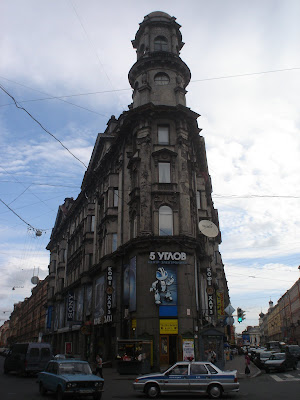 This time in the run up to Christmas, instead of talking about my daily experiences I wanted to take you back to the siege of St. Petersburg in 1942, then known as Leningrad. I am aware that we live in a multinational society and manage to live more or less in peace without the old spectres of history past haunting our newly found camaraderie. Therefore, this is not an attempt to recall the past to score points against any nationality, race or creed, but simply a story of humanity continuing to be creative in destructive times.
During the 900 day siege of Leningrad, which lasted from 1941 to 1944, the city’s almost three million civilians refused to surrender. Food, heat and almost everything else, was heavily rationed and reached an all time low at one point of only 125 grams of bread per person per day. In just two months, January and February of 1942, 200,000 people died in Leningrad of cold and starvation.
Besides their daily struggle of defending the city, the Leningraders were also writing poetry and music. It was then that the renowned Russian composer Dmitri Shostakovich wrote his famous Seventh Symphony that immediately became a stirring anthem to the world. Problem was, the Leningrad radio orchestra was now too small to play the Seventh Symphony. The score called for 80 musicians and there were only a handful of them spared by famine and the enemy bullets at the frontlines. Shostakovich made a radio announcement inviting the musicians who were still alive to join in. Unit commanders dispatched their musicians with special passes, which said that they had been relieved from combat duty to perform the Seventh Symphony by Dmitri Shostakovich. 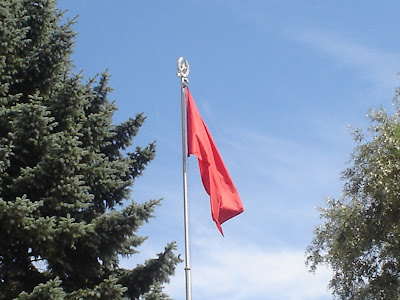 Finally, they all got together for the first rehearsal, their hands roughened from combat duty, trembling from malnutrition, but everybody still clinging to their instruments as if for their own life. That was the shortest rehearsal ever, lasting for just 15 minutes because that was all the emaciated players could afford in energy. Conductor Karl Eliasberg barely able to stand himself, now knew that the orchestra would play the symphony.
August 9th, 1942 was just another day in the besieged city. But not for the musicians, though who, visibly uplifted, were busily preparing for the first ever public performance of the Seventh Symphony. Karl Eliasberg later wrote recalling that memorable day: ‘The chandeliers were all aglow in the Philharmonic Hall jam packed by writers, artists and academics. Military men were also very much in presence, most of them right from the battlefront…’
The conductor, his tuxedo hanging loosely from his emaciated body, stepped to the pulpit, his baton trembling in his hand, and suddenly the hall filled with the stirringly beautiful chords of one of the best musical pieces Shostakovich had ever written in his whole life.
When the last chord trailed off there was silence. Then the whole place literally exploded with thunderous applause. People rose to their feet, tears rolling down their faces.
Buoyed by the deafening success of their performance and visibly proud of themselves, the musicians were happily hugging each other. The concert was blasted throughout the streets of the war torn city by a series of hastily erected speakers. Tens of thousands who risked their lives and gathered to listen to the music were visibly uplifted by it. Today, walk along Nevsky Prospekt and you will see a small insignificant single grey loudspeaker still attached to an old lamppost near Kazan cathedral that has been left in honour of that memorable day. Triumph over adversity always creates a sense of hope for humanity. Back to the present day and another year is almost over. I want to thank all my readers and supporters over the last year. I sincerely hope you all have a wonderful Christmas and a better year in 2010.
Posted by TJ Miles at 4:58 PM 1 comment:

TJ Miles in the studio 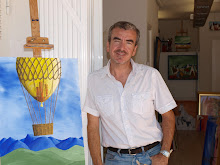 TJ Miles
Irish born international artist TJ Miles regularly travels between his homes and studios in Ireland and Spain. To view galleries that exhibit his work visit his website and click the 'related sites' link